Drag and the solo performer!

Great news from the Diva team this week – the community is rallying for the Awards night coming up on October 29th. The local drag industry has taken its share of blows this year, with less venues and tight financial conditions on those still offering the Sydney entertainment phenomenon.
On the Oxford Street strip and at the Imperial we are still treated to those venue’s flagship shows: Stonewall Hotel sticking with the three cast tradition and the long running Polly’s Folly’s, Arq with its Thursday night show and at the Midnight Shift Club those Friday and Saturday night extravaganzas! 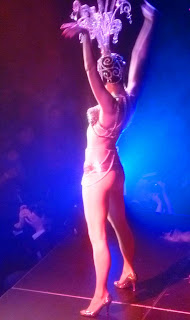 But the news or the battle, lies elsewhere – in solo drag - novelty shows like Tranny Bingo, Drag Queen Karaoke and Tranny Trivia in the City and suburbs and on the strip the ‘one woman show’.
The guys still making drag a full time living are versatile, innovative and bloody brave. Add to this a whole heap of performers we don’t see on the strip and by my count we’ve had 18 to 20 solo performers taking on an audience this year. I spoke to some of these performers about the ups and downs of working solo.
Tora Hymen put it in a nutshell and which I got in consensus from all the guys, “Being a solo performer is much more challenging, you don't have the strength of the group behind you. You rely much more on the audience reaction and as your alone the night rides on your talent, timing, ability to read the audience, to adjust your approach and be spontaneous, improvise and think on your feet. In a group number, everyone goes on stage knowing exactly what they have to do, but with most solo gigs, you have an idea of how the night will go but once you start, anything can happen and to do it well isn't easy, but is rewarding”.
please click to read the rest of this post
2 comments:

That headline has well and truly announced the start of the Diva Season and the clamour to creating the most glamorous Hollywood looks.


I answered my phone about ten weeks ago and was asked the last thing I would ever expect – ‘would you be part of the Diva poster for this year’. Now I’ve had a long association with Diva over the years and - well I understand the honour to be asked to do this.


In 2004 when I was on the Diva board we undertook a marketing survey from a big sample of showgirls, sponsors, and supporters because like many other community organisation’s we needed to really understand our event in the communities eyes, to remain relevant and really - to give us the best chance of surviving in the very tricky event cycle.


Anyway, in that survey the Diva Poster turned out to be one of the events most cherished and loved components and that each year different showgirls getting to feature was seen as an important element of the events buzz.


I was invited to cocktails high above the city at the Sydney Tower where our secret project began. The Diva guys Greg and Tim had asked the other participants and we were all delighted when we discovered our fellow showgirl’s in crime. The guys had a very clear idea of what they wanted – the brief was old Hollywood glamour circa the forties and our reference point was the 1939 film The Women.


All the young people who have never heard of this movie need to get their hands on the DVD straight away – it’s part of a queen’s education, and features one of the screens most glamorous sequences in Adrian’s fashion parade. All the inspiration you need for your Diva look is right there.


It was great that the Diva guys wanted us models to span generations, experiences and creative talents. The Queen of the drag emporium: Chelsea Bun; Sydney’s Favourite Drag Queen: Charisma Belle: the social commentator on all things social; Danita Kokupya and I would represent the former Les Girls. 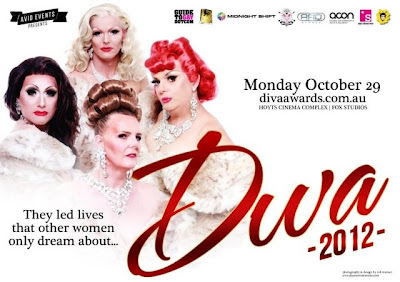