An Afternoon with Megan Mullally

“See that fascinating creature, with perfection stamped on every feature” so goes the lyrics to the Jerry Herman song Look what happened to Mabel, which Megan Mullally sang as part of her very charming cabaret show and lit the fuse to a very splendid afternoon in the theatre.


Appearing at the Sydney Theatre with comedian and pianist Seth Rudetsky as the headline act of the Sydney Mardi Gras 35th Anniversary Festival, Ms Mullally and Mr Rudetsky had a full house as putty in their fine-tuned stage presence hands.
World-famous for her iconic role as Karen Walker on the groundbreaking hit TV series Will & Grace, for which she won two Emmys, Megan has also starred in numerous Broadway shows, including Grease, How to Succeed in Business Without Really Trying, and Mel Brooks’ Young Frankenstein.


It seemed to me the theater was 50/50 of hard Karen Walker fans and musical theater devotees, and I wondered how this format of songs and chat was to keep everyone engaged. But together these guys were just so delightful. Right from the beginning when Megan
sang Broadway Baby from Follies we knew she could sure sing – her phrasing was spectacular. She treated us to even more wonderful Stephen Sondheim songs from Follies, Could I Leave You and a spine tingling Losing my Mind.

I really admire Sydney showgirl Christy McNicol who is celebrating a whopping thirty years at the top of her game. Lucky for me I’ve been a friend of Christy’s for the greater part of that time and at various times over that period I’ve had the wonderful experience of working with her. What you see on stage and in the media is exactly what you get, one of Sydney’s most glamorous and witty showgirls. 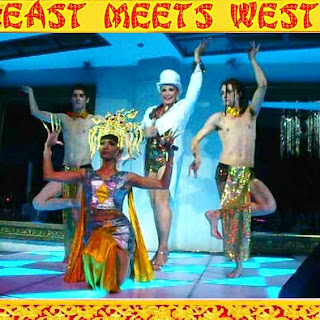 Christy has really done it all, starting at Les Girls in Kings Cross when very young and further developing her signature style working with the prestigious Simone and Monique's Playgirl Revue. She is one of only a handful of drag show entrepreneurs who have gone on and created their own shows. In the late nineties Christy brought together some of Australia's finest transsexuals to create The Original Priscilla Show which toured the country and was nominated for a Mo Award.
To achieve all this and stay at the top you need to be innovative, clever, focused, brave and talented. And I saw all this when Christy launched her new show Live at Last – East meets West, a transgender cabaret to a house full of showgirl colleagues, friends and entertainment agents at Slide Bar this week. 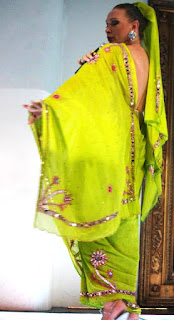 The show is a two hander of Christy and her partner Darlene, a new comer to Australian shore’s fresh from Singapore and two dancing boys. The whole show is two hours of live singing, cute chorry and clever patter and very glamorous costuming.
The concept of the show, being a union of east and west, is created right from the beginning with clever video shot in Bangkok and the girls hitting the stage with a lively One night in Bangkok from Chess and maintained right through to their very glamorous ‘tits and feathers’ Kylie Minogue medley finale.
In between the girls take it in turn to sing solo as well as duet covering a great collection of well-known songs. Both girls get to talk to the audience; Darlene’s fresh approach to sharing the transgender story with the audience a delight.
The girls have used the best to create the magic, with the soundtrack being by Ian Gordon at Atlasworxk, costumes by House of Priscilla and Mama Shirl, wigs by Prada Clutch and Melissa Ali and choreography by Nick Bozanic.

a must see Torch Song Trilogy

Torch Song Trilogy was the Tony Award winning Best Play of 1983 and in this its thirtieth anniversary year is being revived all over the world. One because it’s a gay  classic but more importantly its ideas and messages of the search for love, family and acceptance are as relevant to an audience now as they were in the early eighties.


In Sydney we luckily have the Gaiety Theatre production playing as part of the Sydney Mardi Gras Festival – and its excellent. It seems the critics are giving it the thumbs up but from where I sit social media and good old word of mouth are already acclaiming this one of the festival highlights.
Each act focuses on a different phase in Arnold's life. In the first, Arnold meets Ed, who is uncomfortable with his bisexuality. In the second, one year later, Arnold meets Alan, and the two settle down into a blissful existence that includes plans to adopt a child, until tragedy strikes. In the third, several years later, Arnold is a single father raising gay teenager David. Arnold is forced to deal with his mother's intolerance and disrespect when she visits from Florida.

Almost impossible to belief that the 35th Sydney Mardi Grass festival is about to begin. This year the program leans more to the quality than content trend with favourites returning and some exciting shows playing for the first time.


I’m excited and looking forward to three weeks of fabulous GLBT slanted culture. For all the details visit www.mardigras.org.au or pick up one of their cute little programs and get out and enjoy.
What am I looking forward to the most you ask – well this is my five must see for 2013. 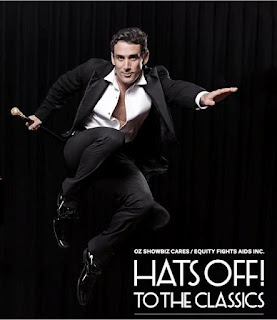 This year is just bound to be special featuring the iconic, timeless and landmark sounds with Hats Off! to the Classics. Including hits from Motown, Disco and every Broadway show, Hats Off! to the Classics promises to be a dream evening for everyone who enjoys the delightful world of musical theatre.
Expected to appear this year are David Harris, Josie Lane, Stephanie Grigg, Deborah Krizak, Monique Salle, Fiona Sullivan, Tom Sharah and of course the always wonderful, Garry Scale. Topping the bill is theatre royalty Nancye Hayes and Toni Lamond with classic Broadway showstoppers.
Taking host duties this year are the fresh and fab Chloe Dallimore and Josh Horner and along with the shows ambassador, winner of Channel 10's I Will Survive Mike Snell the lineup promises to kick the festival off with one huge bang of celebration.
Tina Arena 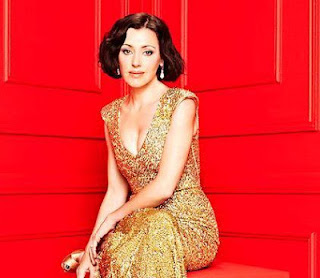 After four sold-out performances in Sydney last year, Tina Arena is returning to the Mardi Gras Festival for an encore performance with her Band and the magnificent Sydney Symphony conducted by young Melbourne conductor Nicholas Buc.
Tina Arena is one of our most successful international recording and performing artists with a career spanning four decades and millions of album sales worldwide; at this show she sings all her hits and a few wonderful standards.
Tina is once again joined on stage by Anthony Callea, Aria Award winner best known for his record breaking single The Prayer, who will sing two outstanding duets, including The Prayer with Tina.
Tina Arena has been a long time friend of the Sydney GLBT community and has performed at many of our celebrations including several of the Post Parade parties, Sleaze Ball’s and the closing of the Gay Games celebrations. She will be the perfect headliner for this our anniversary festival.