Idina Menzel is Broadway royalty, famed in the world of musical  theatre for creating the role of Elphaba the misunderstood, smart, and fiery girl of emerald-green skin who grows up to become the notorious Wicked Witch of the West in the musical Wicked. She won the ‘Tony’ on Broadway, the ‘Oliver’ on the West End and will be singing Defying Gravity for the rest of her career I imagine.


Idina is just completing her first Australian tour and seems to be leaving behind a mass of adoring and delighted fans. The evening I spent in her company at the Sydney Opera House this week is the kind of concert you always remember for its lovely charm and a performer who sure can sing. 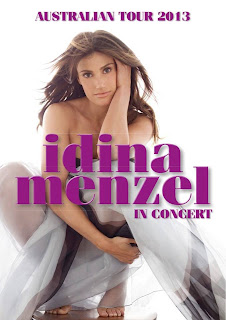 Idina Menzel has appeared in Adelaide, Brisbane, Sydney and Melbourne accompanied by that cities very splendid symphony orchestra, her own traveling trio and conducted by the glamorous Vanessa Scammell.

She literally burst onto the stage at the Opera House and immediately took the roof of the place with The Wizard and I from Wicked and straight into Don’t rain on my Parade from Funny Girl. Talk about starting with a bang!

Idina chose a simple unstructured black gown and was barefoot. Five minutes into her patter and it was obvious this was a very highly strung artist; she seemed to be firing on a whole heap of nervous energy, which to be fair was rather off-putting until you got use to her demeanor. Once she was into a song all of that disappeared.
please click to read the rest of this post
No comments: