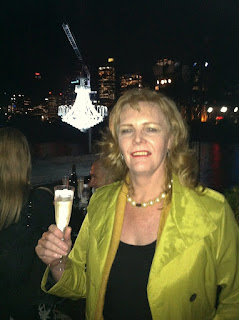 Last week I was lucky enough to see one of the last performances of HANDA Opera on Sydney Harbour – La Traviata and it was one of those ‘I’ll never ever forget nights’ that you could only have in Sydney.  Opera ’s grand experiment to take opera beyond the theatre and weave it into the very fabric of the harbour city has been declared a great success.

As I sat in a 3,000 seat grandstand erected in the Royal Botanic Gardens this wonderful opera unfolded before me in the most thrilling and quite unexpected spectacular for an outdoor show.


Australia’s most accomplished and daring Set Designer Brian Thomson designed a minimal but striking stage which was dominated by a giant chandelier measuring 9-metres x 9-metres, that sparkled with 10,000 Swarovski crystals symbolizing the world of Verdi’s much-loved opera with its glittering Parisian salons. All set off by - one of the most beautiful views in the world.

Tess Schofield designed the 1950’s inspired costumes, which included dazzling Mardi-Gras themed outfits for the masked ball in Act II, with the cast arriving to the stage by LED lit motorboats. The set was complemented by a sophisticated lighting design by John Rayment which created the atmosphere of changing scenes through colour, dazzling light displays and fireworks.

The evening I went Rachelle Durkin sang the role of Violetta and international tenor sang Alfredo. They were both excellent and the crowd adored them. The sound was super impressive given we were sitting in a park with the evening breeze floating over us from the water. All in all it was the kind of evening that you never forget and worth every cent of the somewhat expensive tickets.

The good news is that Opera on will be staged again in 2013 and feature Bizet’s great opera Carmen. It will be directed by Gale Edwards, who directed last years highly successful production of ‘La boheme’ and Brian Thomson will return to again design the staging. So come next April, if you possibly can, please don’t miss out on this experience of a lifetime.

In the mean time this spectacular event was filmed for TV and will screen on SBS Studio on Monday 30 April at 8.40pm.