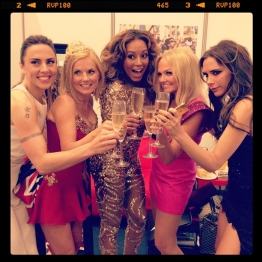 
It seems they were all very delighted with how it went and each of them has commented throughout the week. Geri said in a statement "I'm so proud we could be part of it, thank you to my fellow Spice Girls who are shining examples of wonderful women and all the fans who cheered for us”. Victoria took to tweeter “We did it!! I love u girls so much!!!!! xxx vb”. Mel C said "It was an incredible night and us girls had the best time being together." And Emma said "It was an honour to represent my country and I had the best night with my girls”.


But it was Mel B who had the most interesting things to say, in a statement to MTV she said “I do think we looked a little bit more older and a little bit more put-together and classier. Compared to 15, 20 years ago when we didn't really know what was going on too much when it comes to fashion and hair and makeup and stuff. We have had our looks refined a little bit. I think we all look amazing, of course. They're my sisters. I adore them impeccably."


We love Mel B here in Sydney since she’s been working on Australian TV and she never disappoints in the looks department—even the outfit she wore last week was simply to die for by showgirl standards. I read somewhere that she partied till 6am and still in that suit!


Talk is rife of a reunion tour but I can’t see Victoria being part of it though, she has that David and four kids to look after, but Mel B seems to think well that’s OK too. A new west end musical based on their catalogue of songs opens in December so all things Spice Girls have certainly stirred—viva forever girls.