‘Everything old is new again’

One of my old Les Girls numbers, music & lyrics by Peter Allen and sung by Julie Anthony circa 1974. Sure I’m being a tad nostalgic, but it seems to be very much the fashion devoir!
It was only in early July I blogged about the birth of the Lost Gay Sydney concept and thousands who shared collective experiences took a quick peak over their shoulder, back to what they thought was a more interesting and fun time.
For a time Lost Gay Sydney grabbed a whole community’s interest, but of course that waned, unfortunately helped along by the odd negative bitter old queen killing the buzz for everyone.
But other stuff has taken traction. For instance next year we celebre our 35th Mardi Gras Festival Generations of Love; expect nostalgia to play its part in that and the Mardi Gras Museum initiative getting its first tangible outing. But before then we have a community event tagged Gay Sydney Reunited, a T-dance produced by Jake Colter and Misha Heaton to be held at the Metro on Sunday 9 December. 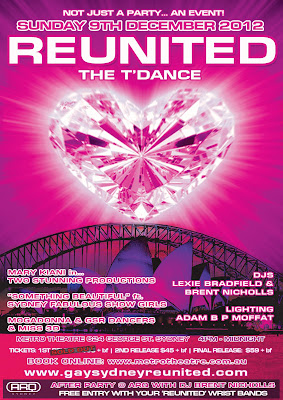 I spoke to Jake this week and asked him why he was producing this event. “I was inspired by Sydney’s trip down nostalgia lane and wanted to put on an event that not only honored our past and embraces our future, but an event that brings people together as one, a place where all walks of the wider community can catch up and celebrate together”. If all goes well Jake and Misha hope to donate towards the establishment of a Mardi Gras museum.

Jake is assembling a lovely cross section of performers from that era including the great DJ Lexie Bradfield coming out of retirement and DJ Brent Nicholls flying in from London to spin the tunes, Miss 3D and Mogadona and headlining is Mary Kiani.

Opening the afternoon’s entertainment is a group of eight showgirls, of which I’m one, who will recreate a touch of showgirl glamour reminiscent of the 80’s and 90’s. In the style of Les Girls or Simone & Monique Playgirls Revue from whose cast’s we hail, a group of familiar trans showgirls from many an Oxford Street club or pub of the last decade.

In the spirit of being ‘reunited’ we’ve been having great fun coming together after a long while and enjoying the campness and camaraderie these kind of experiences create; it’s been a long while since a trans showgirl show has graced a community gig. Creatively we’re in good hands with Penny Clifford producing the show and hot young choreographer Aaron Harkness creating the look.  Check out the clip below to introduce the cast – and hopefully we’ll see you on the dance floor again.