An Afternoon with Megan Mullally

“See that fascinating creature, with perfection stamped on every feature” so goes the lyrics to the Jerry Herman song Look what happened to Mabel, which Megan Mullally sang as part of her very charming cabaret show and lit the fuse to a very splendid afternoon in the theatre.


Appearing at the Sydney Theatre with comedian and pianist Seth Rudetsky as the headline act of the Sydney Mardi Gras 35th Anniversary Festival, Ms Mullally and Mr Rudetsky had a full house as putty in their fine-tuned stage presence hands.
World-famous for her iconic role as Karen Walker on the groundbreaking hit TV series Will & Grace, for which she won two Emmys, Megan has also starred in numerous Broadway shows, including Grease, How to Succeed in Business Without Really Trying, and Mel Brooks’ Young Frankenstein.


It seemed to me the theater was 50/50 of hard Karen Walker fans and musical theater devotees, and I wondered how this format of songs and chat was to keep everyone engaged. But together these guys were just so delightful. Right from the beginning when Megan
sang Broadway Baby from Follies we knew she could sure sing – her phrasing was spectacular. She treated us to even more wonderful Stephen Sondheim songs from Follies, Could I Leave You and a spine tingling Losing my Mind. 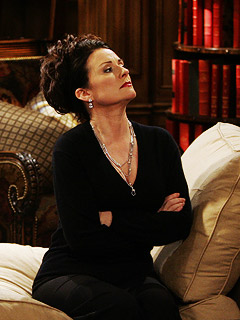 In-between she and Seth Rudetsky sat casually in arm chairs and discussed her career and their friendship. Seth was the perfect host drawing out just the kind of stories keen fans of Will and Grace were there to hear. It was all so genuine and casual and whilst they may have known where this chat was going it certainly felt free flowing and unrehearsed.
We were to learn that following the wrap of Will and Grace a musical called Karen: The Musical was being developed. There was a producer, director and composer on board but at the last minute the rights to Karen were withdrawn.

We had all had such great fun and been treated to a very special afternoon the prolonged standing ovation was so very well deserved. Returning for an encore Megan surprised us with Dr. Longjohn, the 70’s Bette Midler song that she recorded and to which Kristen Bell lip-synched in the recent movie Burlesque. Sassy, a little naughty and belting – summed up our afternoon.