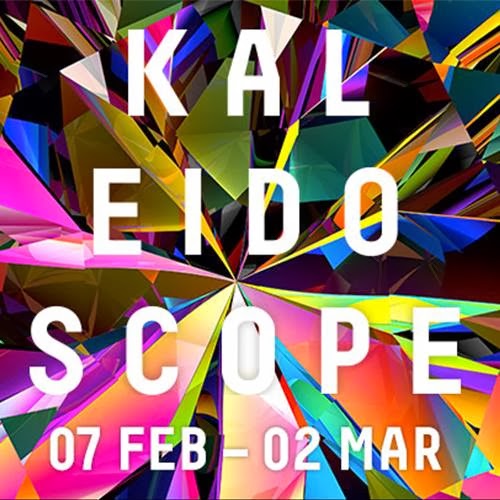 It’s that time of year again when Sydney stages take on an altogether gayer hue. The Sydney Gay and Lesbian Mardi Gras Festival will run from February 7 through to March 2. This year the Festival boasts big name stars in theatre and cabaret, and plays on main stages and inner city independent theatres.

I’m excited and looking forward to three weeks of fabulous LGBTQI slanted culture. For all the details visit www.mardigras.org.au or pick up one of their cute little programs and get out and enjoy.

What am I looking forward to the most – well this is my five shows to see for 2014. 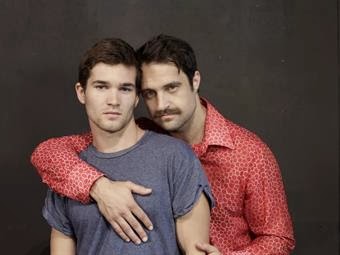 Marvin has left his wife and son for a male lover. Meanwhile, Trina has shacked up with Marvin’s shrink. Amongst this there’s also a Bar Mitzvah to organise. Is it too much to ask for everyone to get along? Wickedly funny lyrics accompany a live piano score in this quirky yet tender tale about family, growing up and what it means to be a man.

This Tony Award-winning musical about the original modern family is directed by Stephen Colyer who brought us the smash hit of last year’s Festival Torch Song Trilogy. It’s playing at the brand new Eternity Playhouse in Darlinghurst and has all the markings and promise of ‘must see’ all over it.

Appearing in the cast of Falsettos is one of our hottest actors right now Katrina Retallick, she was hilarious in the Addams Family last year and just won the Best Actress in a Musical for Dirty Rotten Scoundrels at the Sydney Critic Awards. She has incredible comedic timing and can sure sing – can’t wait to see her in this. 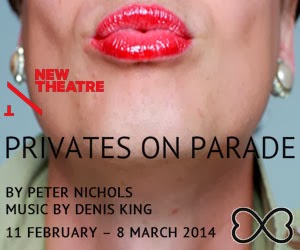 When young and innocent Private Steven Flowers is posted to entertain the British troops during the Malayan Emergency in 1948, he finds himself in a company of military misfits.

The star of the troupe is flamboyant Captain ‘Auntie’ Terri Dennis, running the gamut of drag from Carmen Miranda to Marlene Dietrich to Vera Lynn. With a penchant for sailors and a heart of gold, he benevolently guides this group of shy, sexually inexperienced young lads, straight and gay, as they journey from boys to men.

This is some of the best English farce, in the same company as the Carry On films and the Brian Rix shows. This famous Peter Nichol’s coming-of-age comedy is underpinned by darker political themes and personal stories of fear, loneliness and falling in love, all served up in a camp concoction of songs, dance, blokes in frocks and very naughty laughs.

This show stars James Lee who has appeared in the Australian productions of Fiddler on the Roof, Miss Saigon, Les Miserables, 42nd Street, The Phantom of the Opera (twice), Jerry Springer the Opera and the latest revival of Annie. We can’t forget his turn as Molina in Kiss of the Spiderwoman for which he was nominated for a Sydney Theatre Award. This will be silly, hilarious and very very high camp – the kind of show that sits so perfectly in the Festival.
Hats Off 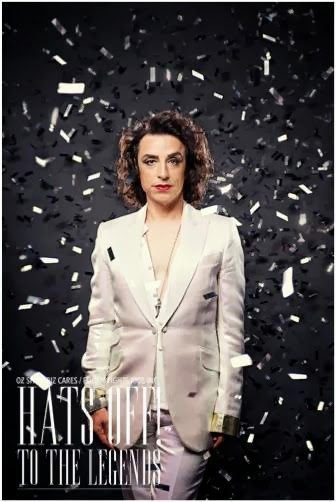 Last year this show was just the most exciting and enjoyable night of cabaret and variety anyone could wish for. So many wonderful performances on the same bill and the show raised heaps of dough for charity.

One of my Festival favourites and never to be missed - Hats Off! This wonderful gala variety of musical theatre and cabaret stars gathers to raise funds for the fight against HIV/AIDS and since 1997, Oz Showbiz Cares / Equity Fights AIDS Inc. have raised over $750,000 for critically needed services for people with AIDS, HIV and HIV-related illnesses.

This year its Hats Off to the Legends and will honour artists and entertainers, both past and present, whose contribution to the world of theatre and music continues to inspire.
Our very own living legend Paul Capsis has been appointed the events Ambassador; he has been at the forefront of fundraising performance since the 80’s, and in 2013 won an ACON Honour Award for his outstanding contribution to the performing arts and for many years of donating his time and talent for various LGBTI charity fundraisers. Isn’t the main promotional image of Paul by Blueprint Studios just magnificent?

RuPaul’s Drag Race reigning queen – Jinkx Monsoon makes her Australian debut in The Vaudevillians with co-star Major Scales. This show has been touring the major cities and comes to Sydney for the Festival preceded by wonderful reviews. 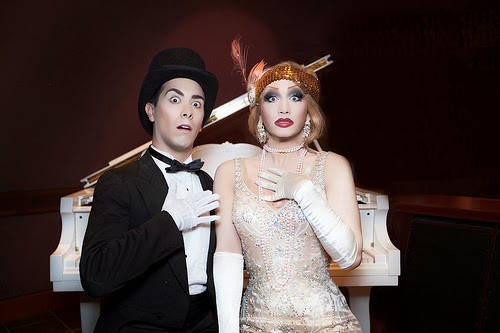 Throughout the 1920s Kitty Witless (Jinkx) and Dr. Dan Von Dandy (Major Scales) toured speakeasies and burlesque theatres, wowing audiences with their edgy, original music. Unfortunately, one day, tragedy struck. While touring through Antarctica, they were victims of a devastating avalanche and were buried under two tons of sleet and snow – instantly freezing them alive.

But thanks to global warming, they recently thawed out only to discover, that pop artists of various decades had stolen their music and passed it off as their own. Much to their shock and chagrin, songs including “Girls Just Want to Have Fun” (which was originally about the woman’s Suffragette movement), and “Drop it Like it’s Hot” (which was originally about the invention of the electric iron) had become hits for lesser artists.

Timeout Melbourne said “it’s an expert blend of comedy, song and theatre”. Aussie Theatre, “This is drag that’s as smart as it is hilarious - the hit of Midsumma”. And over in Perth for the Fringe World festival, Australian Stage Online said “This is top-of-the line cabaret, you won’t see any better work than this”.

Returning as a one night only headline act of the Festival is Courtney Act and her wonderful cabaret show Boys Like Me. Courtney brought this new show home to us in Sydney in September after a very well received season in New York and LA. 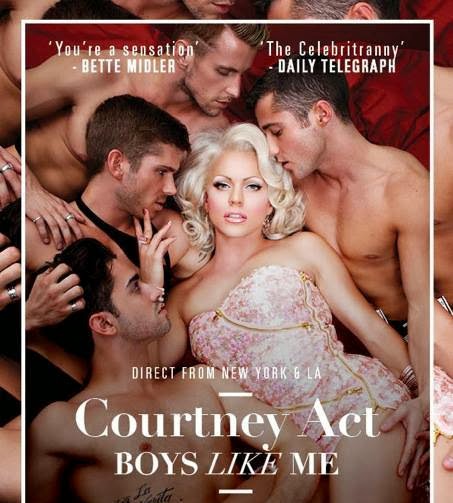 In my review I wrote at the time: Boys Like Me was a clever ninety minute showcase of Courtney’s charm. It tells the story of her life in the US and the sexual encounters and delights she has experienced walking the gender divide.
As I said - what’s not to like about a string of tantalising sex stories and a whole lot of perfectly selected pop songs to illuminate the point. It was a fantastic show, with an audience that evening of many long-time friends and acquaintances who collectively were proud of how far ‘our Courtney’ had come.

I’ve been along for the ride now of each of Courtney’s cabaret shows and this one really is a wonderful step into a whole new world of slick and polish. This will be fabulous playing in the magnificent Sydney Theatre and which Courtney is calling a career highlight. Well done on Sydney Gay and Lesbian Mardi Gras for brining Boys Like Me back so many more festival goers can experience this sensational showgirl!
For more information and how to book go to www.mardigras.org.au. But the biggest tip of all is – just see something, you won’t regret it – trust me!