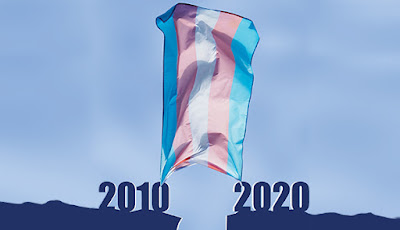 As we farewell this decade it’s fair to acknowledge that the phenomena of a transgender awakening crossed both the LGBTI and the wider culture in such a way as to affect a permanent and profound state of visibility that will be marked in the history of humankind henceforth.

There can be no more a significant occurrence since the AIDS crisis of the 1980s in our LGBTI history. Not just here in Australia but worldwide.

I wrote in my SX Magazine column in 2015 that leading this charge and putting the issues on the the world stage was the feature in the June 2014 issue of Time magazine. ‘The Transgender Tipping Point – America’s next civil rights frontier’ by Jaty Steinmetz which profiled a range of transgender people.

For the first time anywhere in the world a magazine with the credibility and power of Time put Laverne Cox on its cover. Laverne Cox is an African-American trans women, she stars in the Netflix drama Orange is the New Black, and has become a leading voice for trans visibility and activism worldwide.

What happened from that point would continue until today as an increasing number of trans women stepped into the light with strength and pride. We must acknowledge that this then left the door open for Trans Men, Gender Diverse and Non-Binary folk to follow.

In incredible numbers, people began to tell their story and it's exactly this that defines the decade.

Reaching a level of visibility of unimaginable proportions was the revealing of Caitlyn Jenner. As the cover girl for the July 2015 issue of Vanity Fair, Jenner took the trans story to millions all over the world. She continues to influence public perception, recently in December 19 opening up about her transition while appearing on the UK’s I’m A Celebrity … Get Me Out of Here!

At the same time in Australia Cate McGregor had high visibility. First known to the public as the highest-ranking trans person in the Australian military, Cate was profiled in the Australian Women's Weekly's March 2015 issue and her Australian Story, ‘Call Me Cate’ exposed a different snapshot of a trans life to the mainstream public. Cate went on to become a popular speaker telling her transition story all over the country and to wide-ranging audiences.

In June 2014 ‘Carlotta the movie’ premiered on Australian TV. The movie shows Carlotta growing up in the fifties, the gender confusion and more so the response to it. This movie handled the more confronting and challenging aspects of her life, those out of the spotlight, with great sensitivity and gave an accurate insight to what it is to grow up and live a trans life.

These women, I celebrate, as they were the beginning of this time of increasing visibility.

In the midst of all this, Peta Friend, an acquaintance of mine for over 20 years, invited me and five local trans women of all ages to lunch in September 2015. She had an idea to create a social and support group for trans men and women of Sydney. By the end of that lunch, we created Trans Sydney Pride.

Now known as Trans Pride Australia this group has 1,200 members and hosts social and commemorative events, acts as a channel for support and services and promotes visibility and awareness.

The Sydney scene was certainly changing and in 2018 I got the opportunity to explore this as the guest writer for the Star Observers: Sydney Gay and Lesbian Mardi Gras 40th Anniversary edition.

The T in Sydney’s LGBTI felt more inclusive than ever. The community was embracing the new level of trans visibility with a broad presence in the Mardi Gras parade, the party and the festival.

Looking back at that time I feel proud to have been a speaker at the first Trans Stories (40 Years) telling our history and speaking my truth. This event has each year since taken very personal stories to our community who are listening with new respect and interest of the local trans perspective.

In these final years of this decade, a new generation of role models was arriving to bring us to this moment. Georgie Stone is a transgender girl from Melbourne, Victoria. She is an advocate for trans and gender diverse children and youth has been a visible and passionate advocate for the removal of the Family Court from the medical decisions of trans teens.

Jordan Raskopoulos is an entertainer and trans advocate who uses her platform and profile to promote awareness and understanding to a broad audience through humour. She is a popular artist and presenter within our local community but has the rare talent to engage with straight audiences in ever-increasing numbers.

Holly Conroy won the 2019 Honour Award of Community Hero. She was a driving force behind the first Wagga Wagga Mardi Gras Festival in 2019, which became one of the biggest LGBTI celebrations ever held in the Riverina. She is spreading her story and visibility of the trans experience to regional Australia.

Tangible results are appearing locally. A great number of corporate businesses have adopted policies and processes to benefit trans employment. Public sector agencies are consulting trans people on issues that affect them and allowing that experience to influence programs.

Looking back at what I wrote in 2015, I hoped that this new level of visibility would lead to a more trans-friendly world. I could never have imagined how important this decade would become and how it would change the trans experience forever.