Well preparations are in full swing for the 34th annual Sydney Gay and Lesbian Mardi Gras and I’m feeling the good vibe sitting over us – just mine is one of very mixed emotions!


When I set off to celebrate on Saturday I’ll be doing it for my 30th time. It would have just been unimaginable way back in February 1982 to think us, let alone I, would be continuing to tread the golden mile as a community in our annual celebration of pride. 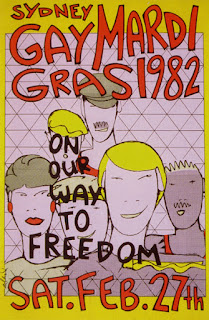 Everyone remembers their first Mardi Gras: I and my girlfriends had recently left Les Girls and had moved our partying from Kings Cross to Oxford Street; we were part of an exciting crowd to whom the Exchange Hotel and Patches nightclub was the centre of our gayness.


We headed to the Exchange for drinks in preparation for what was the first parade on the now well trodden route of today. Up on the awning the cast of Mixed Company began to appear one at a time, in ten minute intervals, dressed all in white to the hit of the day Billy Idol’s White Wedding. Chris De Bonnafin, Teresa Green and Cindy Pastel, three larger than life theatrical showgirls creating the most wonderful pre parade atmosphere. As the parade began to arrive at the hotel Julie Ashton appeared on the roof and in full spotlight abseiled down the front of the building doing Looking for Trade from Richard O'Brien's (1981) Shock Treatment. The parade just stopped dead in its track – the screaming and cheering deafening – we had arrived to claim our street in celebration.

Everyone joined the end of the parade for the walk to the Showgrounds and to the very first party to be held there in the AMP pavilion. We were part of 4000 people, mostly gay men and drag queens, to party our tits off  - as we still do and I will some thirty years later.


Unexpectedly for me over the last two weeks as this anniversary approached I’ve found my mind taking me through the parties of these past years, remembering the tunes, the wonderful shows, DJ’s, entertainers, the lighting rigs, along with the growth and pain we as a community have experienced. I can connect major life experiences to specific party years – and I’m grateful it’s been there to lend me support, to show me strength and light my life as well as a place to celebrate who I am. 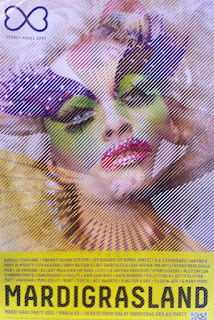 But what I’ve been thinking about the most are the many many friends who I’ve shared these experiences with, sadly many have died, those whose path has taken them out of my life, those for whom partying is redundant, and grateful for those I’ll share 2012 with. I think it’s a time so very special to us all - gay family, acquaintances, beautiful strangers and a community altogether under one mirror-ball.

I’m thankful I still have such enthusiasm to be part of our celebrations, and just like I have done for the last thirty years I’m planning my outfit, getting excited to see RuPaul and Kylie – excited to see friends – excited to be claiming my piece of dance floor – excited to be feeling the spirit that is ours at this time. Happy Mardi Gras!