The Rainbow Flag the ultimate symbol of ‘Queer Together’

Recently in a review I used the term ‘Queer Together’ and seemed to have hit on something according to the many emails and messages I received. So by way of context: I was at a cocktail party given by a friend of mine of over twenty years and who had recently committed to a new younger partner after being alone for many years since his first partner was lost to HIV/AIDS in the early nineties. Given that’s almost a gay lifetime I was extremely happy for his new state of domestic bliss.


For the party each of the guys had invited ten significant friends and given their age gap of fifteen years a mixed, diverse and board age group gathered to celebrate. Both the guys are active community supporters, albeit at different periods of time, and conversation turned to this notion of the Sydney LGBTQI having a history of being collaborative and connected with a real sense of gay family. One of the elders regaled everyone with stories around the birth of our coalition organisations during the challenging time of the eighties when many tribes came together as one to celebrate and mourn that dark period.
I suggested this is something special for Sydney, something still tangible and visible, although we now have more specific tribe collectives and spaces we still have pockets of being ‘Queer Together’.


And surely the symbol of this ‘Queer Together’ is the Rainbow Flag which all tribes relate to. Soon it will be displayed on the balconies of peoples homes, decorate the window of businesses on the strip, fly from the back of a dykes beautiful bike and drape a near naked bear’s shoulders. 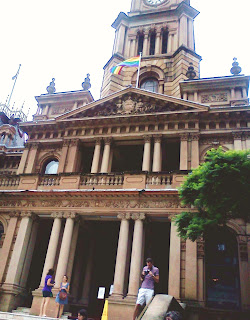 Of course the most significant display of the rainbow flag is that flying above the Sydney Town Hall, crowning our city as a leading gay city and allowing everyone in the LGBTQI family to unite in pride.
Following the example of other great gay cities of the world the City of Sydney decided in September 2009 that the rainbow flag should fly over Town Hall during the Sydney Mardi Gras and Pride week.
Recently the Lord Mayor, Clover Moore said "The rainbow flag is a symbol of equality, respect and inclusion and shows that Sydney is gay-friendly and gay-safe. I am proud that the City's most important civic building is flying the colours of red, yellow, orange, green, blue and violet to show our unwavering support for the GLBT community”.
The rainbow flag originated in San Francisco about 30 years ago and was designed by artist Gilbert Baker for the Californian city's Gay and Lesbian Freedom Day Parade. Since then it has become a worldwide emblem of gay pride. The red in the flag symbolises life, while orange denotes healing, yellow is for sunlight, green represents nature, blue stands for harmony and violet signifies spirit.
So there’s a lot going on in this flag, as is often the case of any flag, but somehow for us in Sydney seeing it fly from our city Town Hall it pulls all the years past together, all the people before us and all our tribes together united in this sense of ‘Queer Together’ in a celebration of pride and hope.