The Broadway director Elia Kazan said of Tennessee Williams: "Everything in his life is in his plays, and everything in his plays is in his life." Williams struggled with depression throughout most of his life and lived with the constant fear that he would go insane as did his sister Rose. For much of it, he battled addictions to prescription drugs and alcohol, mental instability and issues in coming to terms with being homosexual.


Sydney audiences seem to be attracted to these notions and to the works of Tennessee Williams. Over recent years productions of his plays have been huge hits. These are big plays in the theatre world and require fine acting to be successful.
The Sydney Theatre Company presented William’s The Glass Menagerie in 2002 with Robyn Nevin and Marcus Graham being hailed as some of the best theatre Sydney had seen in years, with a season extended and extended.  Cate Blanchett and Joel Edgerton starred in a very sexy A Streetcar Named Desire in 2009, which won every possible theatre accolade going and toured to New York to great acclaim.
So Cat on a Hot Tin Roof, currently playing at Belvoir, was hugely anticipated and enjoys such great presale that this season will be extended and transfer to the Theatre Royal. But for me it’s not in the same class as those former productions – it’s good but not great.
The play is set at the home of Brick and Maggie where all the family have gathered to celebrate Bricks fathers 65th birthday. Big Daddy and Big Mama are wealthy land owners with two children, Brick and Gooper. Both are married. Brick is married to Maggie and Gooper is married to Mae. Gooper and Mae have five children, established jobs and a normal home setting. Brick is an alcoholic who refuses to sleep with his wife because he blames her for the death of his best friend, Skipper.  Big Daddy is dying of cancer and although this has been kept from him and his wife, the rest of the family are circling and fighting over who will inherit the wealth.

You know you’re in for something very special when a theatre foyer glows with an electric atmosphere of anticipation. So it was when my friend and I arrived at Sydney’s Theatre Royal this week to see the Alfred Uhry's timeless Pulitzer Prize-winning classic, Driving Miss Daisy. 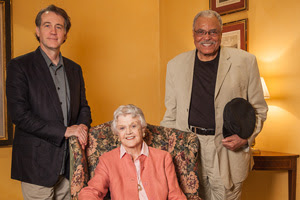 This Australian tour stars the extraordinary talents of the legendary five-time Tony Award winner and three-time Academy Award nominee Angela Lansbury and two-time Tony Award winner and Honorary Academy Award recipient James Earl Jones. Also starring four-time Tony Award winner Boyd Gaines, David Esbjornson's acclaimed, smash-hit production has dazzled audiences and critics on Broadway and the West End.
The play spans a period of twenty-five years in an unbroken series of segments. At the beginning of the play, 1948, Daisy Werthan, Angela Lansbury, a seventy-two-year-old, southern Jewish widow, has just crashed her brand new car while backing it out of the garage. After the accident, her son Boolie, Boyd Gaines, insists that she is not capable of driving. Over her protests, he hires a driver — Hoke Coleburn, James Earl Jones an uneducated African American who is sixty. At first, Daisy wants nothing to do with Hoke but over the course of the play this unlikely pair becomes best friends.
Over short and often very witty scenes we travel through many years highlighting their changing relationships, and as the play concludes its 1973, Daisy is ninety-seven and Hoke is eighty-five, we have been witness to a backdrop of prejudice, inequality and civil unrest whist experiencing a wonderful story of friendship and aging.
These performances are extraordinary, the characters totally have you in the moment; as an audience you experience and feel the tensions and challenges of the place and time. It’s not at all dark; one of the most enduring aspects is just how witty the dialogue is.