The Broadway director Elia Kazan said of Tennessee Williams: "Everything in his life is in his plays, and everything in his plays is in his life." Williams struggled with depression throughout most of his life and lived with the constant fear that he would go insane as did his sister Rose. For much of it, he battled addictions to prescription drugs and alcohol, mental instability and issues in coming to terms with being homosexual.


Sydney audiences seem to be attracted to these notions and to the works of Tennessee Williams. Over recent years productions of his plays have been huge hits. These are big plays in the theatre world and require fine acting to be successful.
The Sydney Theatre Company presented William’s The Glass Menagerie in 2002 with Robyn Nevin and Marcus Graham being hailed as some of the best theatre Sydney had seen in years, with a season extended and extended.  Cate Blanchett and Joel Edgerton starred in a very sexy A Streetcar Named Desire in 2009, which won every possible theatre accolade going and toured to New York to great acclaim.
So Cat on a Hot Tin Roof, currently playing at Belvoir, was hugely anticipated and enjoys such great presale that this season will be extended and transfer to the Theatre Royal. But for me it’s not in the same class as those former productions – it’s good but not great.
The play is set at the home of Brick and Maggie where all the family have gathered to celebrate Bricks fathers 65th birthday. Big Daddy and Big Mama are wealthy land owners with two children, Brick and Gooper. Both are married. Brick is married to Maggie and Gooper is married to Mae. Gooper and Mae have five children, established jobs and a normal home setting. Brick is an alcoholic who refuses to sleep with his wife because he blames her for the death of his best friend, Skipper.  Big Daddy is dying of cancer and although this has been kept from him and his wife, the rest of the family are circling and fighting over who will inherit the wealth.

So the play at its heart has two themes. The first is the dysfunctional, every-man-for-himself family, where no one likes each other and in dramatic style it comes out once it’s known the patriarch is drying. These scenes and especially the performance of Lynette Curran, as Big Mama, are very real and totally believable. This was gripping and emotional. 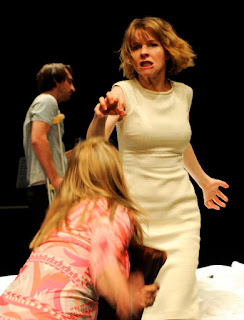 The second is the relationship between Brick, Ewen Leslie and Maggie, Jacqueline McKenzie, which is a marriage without sex because her husband is alcoholic and she thinks homosexual.  Ewen Leslie is terrific in the role of Brick, you won’t like him and it will vary, depending where you sit, if his latent sexuality will give you any empathy for him.
Jacqueline McKenzie is one of our country’s best actresses but here her portrayal of Maggie – the cat on the hot tin roof – just didn’t have the sexuality I needed to be believable. For me it was more anxious North Shore middle class than a women consumed with frustration.
I think in part because the Director, Simon Stone, has decided to do away with the Mississippi and the Southern accents for our local twang, and set the play in the present. He argues the play was not written to be a classic but a play about a human dilemma. But that was in the 1950’s and for the most part the world has moved on. His decisions work well for the theme of family but seem to reduce the powerful sexual tension in Brick and Maggie’s relationship for which this play is famous.