These spectacular arena shows are to me this day Ringling Brothers – ‘greatest show on earth’, a super sensory overload of colour, light and sound held together with magic and a dash of smoke and mirrors.  And so it was with this the fifth concert tour by American recording artist Beyoncé Knowles.
This show was one of the most expensive productions I’ve seen – in the same class as a Madonna or Michael Jackson world tour shows. It contained the use of every stage effect you could possibly have, the video element was huge and I mean a huge screen that covered the whole front of stage area at times, truly pretty lighting and many many wonderful costumes. 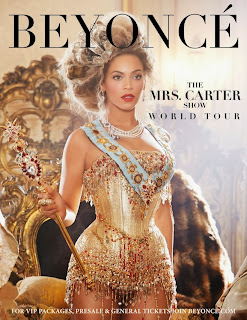 This was cleverly blurred as the video came to life in dance and suddenly Beyoncé arrived in white and just stood there for several seconds as the whole arena stood as one to welcome the queen! ‘Run the World’ was the first of many of the hits from her last album 4; ‘End of Time’ and ‘If I Were a Boy’. It’s fair to say, at this show, that her voice for the first few songs was showing the signs of ‘fourth night in a row’ syndrome but once off and running we were treated to all of the bells and whistles of her amazing talent. 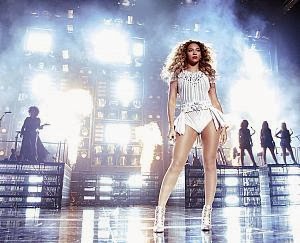 One of many costume changes and some of the popular songs we got were; ‘Baby Boy’, ‘Diva’, ‘Naughty Girl’ and ‘Party’,  and by which time the whole arena was partying – everyone on their feet, dancing and most singing along with every lyric.
As the mood took a breath all round Beyoncé sang ‘1+1’ in a spectacular blue cat suit kneeling and laying on a grand piano before being flown across the room on a wire through a glitter snow storm to a small stage right in the middle of the fans. Here she sang ‘Irreplaceable’ giving some lucky fans the chance to sing with her, before being joined by her dancers for ‘Love on Top’ and the Destiny Childs ‘Survivor’. 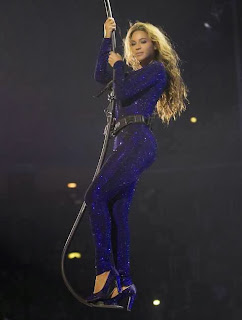 More costume changes and everything was an opulent black and gold for the high energy dance section of the show; ‘Crazy in Love’ and ‘Single Ladies’. Then all too soon a finale, which began with a brief tribute to her ‘idol’ Whitney Houston of ‘I Will Always Love You’, sung accapella and finished in an almost evangelistic ‘Halo’.
Interestingly the audience was made up of about 75% woman and girls all dressed and made-up for a grand outing. And all power to Beyoncé for delivering on her message of positive female power and modern day feminism, everyone on stage were women, all of the band, the three fantastic backing singers and the excellent nine dancers, with just two guys ‘Les Twins’.

The Aussie leg of this tour winds up this week and next plays the US through to New York on December 22. In all, at that time its expected 108 performances will have taken place and the tour is expected to gross over $180 million, the greatest show on earth – well in 2013 at least. 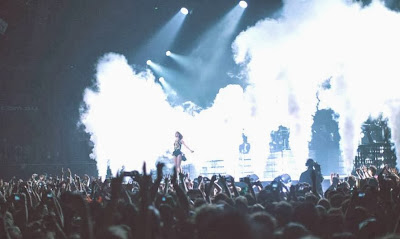