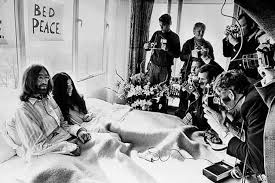 Growing up in Wales as a teenager in the late sixties The Beatles and all they got up to was fascinating and completely drove pop culture of the day. I became aware of Yoko Ono, of course, when she married John Lennon and I can remember their Bed Peace piece in 1969 which was absolutely massive. These two hippies staying in a white bed, in a white room for two weeks in the name of world peace. 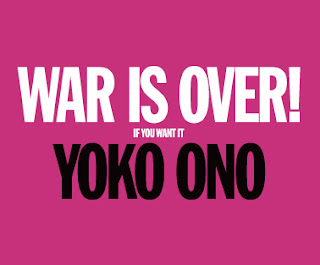 So it seems that Yoko Ono has carried this thread as the driver for her art ever since and currently showing at the Museum of Contemporary Art in Sydney is her first Australian exhibition and of course Peace is its central theme. The title comes from a text work by Ono and her husband John Lennon that first appeared at Christmas 1969 across public billboards in twelve cities worldwide, including New York and London.

Much of the work is installation based and to get the most out of your visit you need to get actively involved with the work. Many of the pieces were first created in the sixties and recreated in the last few years to form this show.
The whole problem is that you have to buy-in to this now quaint notion that sticking a post-it note on a wall will repair your relationship with your mother, or stamping the word peace on your city of choice on a huge map will ensure that place embraces peace, or taking a jigsaw piece of sky away with you in the hope that, one day in the future, the world can build a new sky together. All of which might have been moving in its day but now seems out of touch and silly for us cynics. 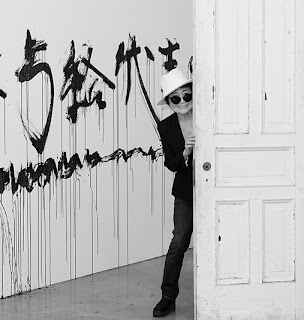 Amongst all this I did find a few pieces engaging, although maybe not in the way Yoko imagined. Wish Tree for Sydney (1996/2013) is presented on the MCA Sculpture Terrace in which visitors are invited to write their private wishes onto small paper cards and tie them to the branches of native Australian trees. Over time, the cards accumulate like blossoms, and the intention is Wish Trees become symbolic of the collective power of the hopes and dreams of those who participate. Reading the wishes of visitors before me was interesting; I must lose weight this year, I wish the pubs closed at two o'clock, and I will give up crystal meth.

I found the highlight to be a modern piece Doors and Sky Puddles (2011) comprising of multiple upright doors that appear to float from the gallery floor. Yoko One wrote the following text alongside the piece: "Doors are just a figment of our imagination, barriers that exist in our mind and we need strength and courage to pass through them". In this large vast space it's a moment that stopped me in my tracks and made the whole visit worthwhile.


This show runs till the end of February at the MCA and will not travel in Australia. I think it has limited appeal, helped by having a context of who Yoko Ono is, but really has  nothing new to say.