Out and about on the Sunday arvo of Bingham Cup weekend and the atmosphere was great. Went to the beer garden for some shandies, people watching and cool tunes – the place was shoulder to shoulder and going off.
When it came my turn to shout I dug deep for the journey to the bar and back, grabbed one of the guys to help carry and started to ease my way through the throng. Manoeuvring around the different groups as we went with nods and smiles and a greeting here and there.  As we passed by a large group of guys I made eye contact with a chap who just beamed back at me although I didn’t think I knew him.
“Excuse me, I’m Alex and I’m sure you won’t remember me but in 1992 when I was ‘coming out’ you were so sweet to me and made me feel welcome, I’ve never forgotten it”.
So turns out Alex as a young 20 year old had arrived in Sydney to become himself and the first place he found on his journey was Friday nights at the Flinders Hotel. 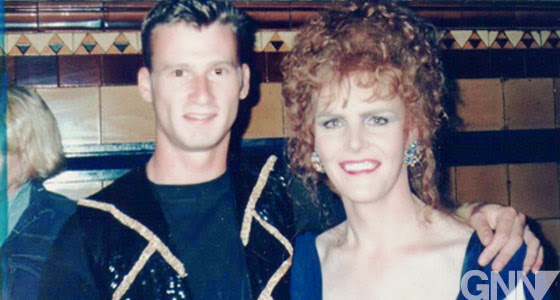 1992: On Friday nights I worked in a show with my girlfriends Pepper Stevens and Chase Manhattan at the Flinders Hotel. In those days Friday night at the Flinders was a very hot place to be, especially for the younger gay guys. There was none of this patron number control business and the guys were packed shoulder to shoulder going wild for a hot young DJ by the name of Paul Goodyear, DIVA DJ of the Year, and our Flinders Floozy’s show which we performed on top of the bar.  Without the use of a safety net, risking life and limb to entertain the troops, we used to say.

Gay Sydney was a wild ride in 1992; we lived in the best of time and the worst of time. It was the reign of Richard Cobden and Susan Harben, our Mardi Gras celebrations were without doubt the most lavish, the parade was the stuff of legend and the gay world had begun to visit us. But we also lived in the worst of the HIV/AIDS shadow. Imagine, amongst all the glamour and campness the Mardi Gras Parade stopped at 10pm for a one minute silence to honour our brave brothers who were dying in large numbers. This must have been an incredible time for Alex and guys like him to ‘come out’.

I worked at Les Girls in Kings Cross during the 70s and it was part of our job every night to mingle with our audience between shows, sign programs, pose for photos. It’s as if ingrained, if you like, into a showgirls operating procedure.

Apparently on Alex’s first nervous foray to the Flinders, a country boy new in town and on his own, I under my normal operating procedure had stopped to say hello. He told me I did this each week even as he began to make friends and develop his crowd - as I would have done too many that crossed my path. Very flattering isn’t it to be remembered like that when after all I’m having the time of my life too.

Alex told me he went on to meet his partner, who was quickly called over to be introduced, moved to Wollongong and opened a business – living happy ever after it seems. The guys had come to town to watch the Rugby and catch up with old friends. His partner was quick to tell me; whenever Alex sees your photo in the paper he always tells his Flinders Hotel stories. How could an old showgirl not be thrilled? 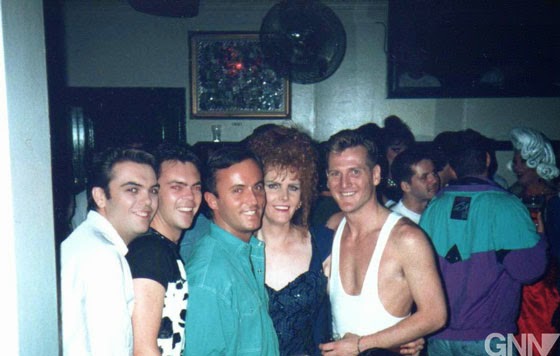 Many of you will have similar experiences to tell I’m sure. I have in the past watched showgirls communicate with their audiences in a similar way. I recall the great performer Ashley Swift used to insist his Divastated cast all head to the Midnight Shift’s outside bar and mix with the punters as soon as the finale finished. It was part of their charm, Ashley, Vanity Faire and Courtney Act – and they packed the place for years.

Likewise Amelia Airhead and her Queen girls, Minnie Cooper and the beautiful Joyce Maynge, would spend ages meeting the fans after their shows. Taking time to say hi to everyone they could. Minnie Cooper has taken this with her throughout her career and along with Verushka Darling they work a room today like were all guests in their lounge rooms.

While these kind of shows have now become more niche than ever, I still think there the kind of venues a young guy like Alex might seek out as he makes those first and often tentative steps into a new gay world.  I’m not convinced by the view of some, that drag and all its colour and fun no longer add to our incredibly differing community values, and argue often a friendly and openly gay venue with its drag queen hostesses continue to play their part in providing a welcoming, non-daunting place for these young people. We can all relate to a time in our ‘coming out’ when we find a place and don’t feel alone. This kind of story is just one of the myriad of elements that can be part of that connection.

Oh dear look where we’ve ended up – a story with a moral.

A showgirl who respects and nurtures their audience members can never know the lasting impression you leave. Find a kind word or welcoming smile, not for just your friends and acquaintances - look for the new or unfamiliar face.

So Alex and I had a lovely moment, we poised for the obligatory photo on his partners phone and wished each other well. I eventually made it to the bar, got my shout and headed back to my crowd armed with my fabulous story. Seems I must have been gone a while as the table was already full of our various beverages. Drinks for days it seemed – oops!