I love the Eurovision Song Contest – always have. As a kid growing up in Wales I was lucky to experience the UK glory years. The representatives were the big names of the day, Sandie Shaw, Lulu, Cliff Richard and Olivia Newton-John were just some. Those songs were the massive hits of the decade and are still played on nostalgic radio stations here in Australia.

Now some sixty years later the event is the biggest production in the world, it has more than a fair share of camp layered over the performances, some of the best looking people ever to grace a television screen and fans – well it’s said there is nothing quite like the Eurovision fans.

And I know this first hand. My friend throws a Eurovision party each year and it’s always one of the year’s best nights. In 2011 we watched the contest broadcast from the German city of Dusseldorf with great anticipation as it had been decided a group of my friends would travel to the winners city the next year.

Bam – off to Azerbaijan.

The Baku edition brought Europe one of the biggest stars in Loreen, as well as amazing pop songs and grannies telling everybody to dance. My friends had the experience of a life time to remember.

Recently, along with my Eurovision fan friend, I had a Eurovision-ish moment. As part of this year’s Mardi Gras Festival, Conchita Wurst, who won the contest in 2014, performed at the Sydney Opera House with the Sydney Symphony Orchestra.  It too was a marvellous evening. Anyway, towards the end of the second act Conchita was joined on stage by Guy Sebastian and as he sang ‘Tonight Again’ the song he sang at last year’s contest and came a very respectable fifth place, TV cameras appeared in the aisles of the centre stalls. They were about to announce Australia’s 2016 entrant live to the evening news and to Europe’s breakfast TV shows. 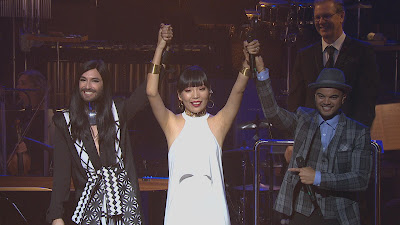 To be fair, after a week of insane speculation that it was to be Tina or Delta, Conchita announced Dami Im. There was respectable applause but also quite a bit of “Who” to be heard. Dami took to the piano and began to perform an acoustic version of ABBA’s 1974 winning song ‘Waterloo’. The orchestra joined in, the tempo took off and we got a very contemporary take on this song. As Dami was bringing the song home the whole concert hall leapt to its feet, clapping and cheering with approval as is the custom for a room full of queens.

Dami grew up in South Korea, coming to Australia with her family at age nine. In addition to singing, her musical talents stretch to playing the violin and piano. Oh and she is the winner of the fifth season of The X Factor Australia and has a recording contract with Sony Music Australia.

But it’s a song contest. Dami’s song is the ‘Sound of Silence’ written by Australian hit makers DNA Songs (David Musumeci and Anthony Egizii) who have written for some of the biggest names in pop music, including Ricky Martin, Jessica Mauboy, Delta Goodrem and The Veronicas as well as penning Dami Im’s X-Factor winner’s single ‘Alive’.

The song is a polished power ballad, the kind the Europeans like and is about feelings of nostalgia, distance and missing the one you love. It’s going down a treat in Europe even though it has failed to make the top twenty charts here.

Dami is currently sitting number three with the tipsters behind the two hunks from France and Russia (in fact this year’s viewing will include male soloists from 14 countries). Just as well, as she has to sing for her votes in Semi Final No 2 to make it to the big night.

Locally, DJ Brett Austin, who remixes under the pop alias Glamstarr has given the track his special magic. He told me once he heard the song he instantly fell in love with it and knew he’d be able to do it justice with a big anthem remix.

Brett said “I wanted to give the song that extra lift, and really give it those hands in the air moments.  The vocal is so exquisite, and powerful, it was just begging for it.”

We’ll get to dance to it at ARQ Sydney where Brett has a residency, meanwhile it’s already been well received by our local DJs and abroad - the promo was released by Sony Music to DJs here and in the UK in early April and to us in mid-May.

“The buzz it’s generating for Dami in Europe is outstanding!” said Brett.