Will we Sleaze again?

There’s a growing buzz about the return of Sleaze Ball. It began with the creation of a Facebook page dedicated to the issue last month and has already amassed 1800 followers. The admin behind the page - former Sydney Mardi Gras chair Marcus Bourget - is active in keeping the momentum going and followers are posting their Sleaze Ball memories, photos of what they wore and the shows they remember as favourites.
The first Sleaze Ball was held at the Paddington Town Hall in September 1982. I recall it with great humour because after spending hours getting ready and pre-party drinks, our group arrived only to be turned away as the place had been full almost since the doors opened.
The next year we all headed to the Showgrounds – the start of 27 years of unforgettable experiences. Sleaze Ball, by definition, was always the more rugged, darker and sexier partner of the Mardi Gras Party. It was, for the greater part of its existence, the main fundraiser produced by Mardi Gras to cover the cost of the parade and festival. 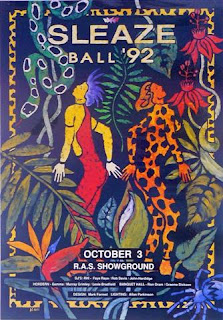 Over the glory years Sleaze Ball had enough punters to fill the RHI, the Hordern and the Dome. It hit its peak in 1997 with ‘Atlantis Sleaze’ when 17,000 tickets were sold. Sadly, by 2010 it had become unrecognisable and the then-Mardi Gras Board decided to delete it from its annual program. Former co-chair Nick Parker described the last dance party as “'the fund-raiser that didn’t”'.
The reasons behind its loss of favour with the community are complex: the rise of small boutique parties, the changing way gay men cruise and hook-up, the move away from the old ghetto suburbs, longstanding partygoers finally growing up and developing family priorities and ever-evolving challenges in engaging the younger people.
So here is the rub, given how we have all moved on from those heady days – is there enough community spirit and goodwill that could actually make this work?
Re-staging the event means it can never be an avenue to fundraise and, in my opinion, that would be the wrong reason to bother. But I support the notion I’m hearing why we should try – to create a second, very local opportunity for all our tribes and generations to come together to nurture, maintain and celebrate community.

You may be one of the sceptics: does this ‘community’ exist? I’m more optimistic than I have been for some time. Walking around the 2016 Mardi Gras Party I was delighted to notice many groups of young people like I had not seen before. So props to Mardi Gras for the work they have been doing in this area – looks very promising. For my own tribe, well, I’m thrilled to say that famous Sydney showgirl fraternity is alive and well.
I was invited to perform in the 1.30am show with 41 other drag queens and showgirls along with eight of our male dancers. George Savoulis, the Creative Director for the Mardi Gras Party, told me the show was part of the continuous effort to reconnect Mardi Gras to the community. That when starting to plan the 2016 party, he knew the party needed drag back in a big spectacular way.
When it was time to construct the party, Ripley Waters – a member of the MG creative team - helped bring DIVA to the table to co-produce and David Olsen, aka Decoda Secret, was bought in to choreograph. Conchita Wurst and Courtney Act were the featured stars and there was one more surprising ingredient – all these queens working together to create a memorable party moment.
What I experienced was all these personalities – four generations of performers, from the older girls to the latest crop of baby drags – minus the sign of any ego, dedicated to giving good show!

Professional dancer and producer Heath Keating summed up everyone’s sentiment when he said: “It’s been 11 years since I was introduced to this community and this was one of the proudest moments I’ve ever felt, to do this with people of the LGBTI community that I am lucky to call my family – that’s the true Mardi Gras.”
I asked Savoulis with this sense of growing community spirit, did he see the return of Sleaze as a possibility?
“This year the Mardi Gras Party was a sell-out,” he said. “We are seeing a trend of people returning to the party – numbers similar to when Sleaze was around.

“Will Sleaze return? That decision is currently with the Board of Mardi Gras. Personally - I think all signs point to the return of Sleaze, it’s just a question of when.”