From 7-30 pm on a warm spring evening people began to gather under the large Pride flag that fly’s on Gilligan’s Island. My trans sisters in a large number, our trans brothers, our beautiful friends and allies and a sprinkling of our community leaders and community organisation’s representatives. The gathering was estimated very conservatively to be of 250 plus.

Just before 8 pm as the light was fading a group of transmen and women, who had marched from an earlier event at Harmony Park, arrived via the South end of the Square led by Police transwoman Sargent Val Wagstaff carrying the Transgender Flag. She took centre position on the Island under the Pride Flag and quietly and with great pride gave the event a visual heart.

Peta Friend the founder of TSP set the mood, as everyone held their flicking candles, with some short well-chosen messages and context of the day, mentioning that our sisters are also gathering at similar events all over the world. Greg Gould sang a very elegant arrangement of ‘Somewhere over the Rainbow’ before the crowd marked a minute of silence. 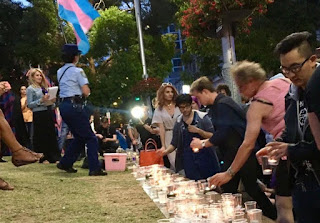 At the invitation of Peta we all began placing our candles along the Island’s perimeter wall as Naomi Palmer, accompanied by Koko D’Vyne on guitar, sang a tender ‘Now is the Hour’. That site of all those flickering candles on mass gave the now dusk light the same glow as many of us had in our hearts.

This wonderful event was produced by Katherine Wolfgramme of TSP with such style and simple grace that combined the spirit of the day’s remembrance aspect with a sense of respect and togetherness of the Sydney community.

Why is this special? Because I think at last we in have found an annual event that the trans community can mark in such a public way, in such an important space – that we can in the now, and moving forward mark November 20 in the diary as a way of acknowledging the T in Sydney’s LGBTI family.