Six o’clock I’m goin’ down
Coffee’s hot and the toast is brown
Hey streetsweeper, clear my way
Sweethearts breakfast is the best in town
The song Breakfast at Sweethearts 1979 was my first encounter with a young band called Cold Chisel. At this time I was appearing in the Les Girls Review, Kings Cross and Cinnamon Jones and I would often eat at this little coffee shop right in the middle of the Cross’s main street (along with another little place called the Aristocrat) often in the very early evening after rehearsal and before Showtime and on occasion for breakfast if we weren’t busy with the boy de jour.
Last week and some thirty years later I got to see this great Aussie band live for the first time in their Light The Nitro arena show and true to all my expectations and just live those breakfasts there the best in town. 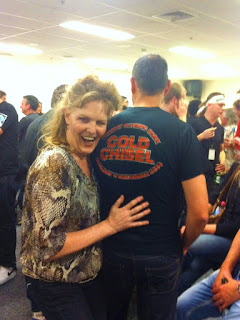 I’d been invited to join a group of friends seeing the show by the Barnes’s and a grand evening ensued. I was an Allphones virgin, stuck in my ‘why can’t they do the Syd Ent Ctr’ ways, but once out there, ensconced in a very fab seat somewhere towards the front and dead centre, it was all about rock and roll!
It was a full house of Cold Chisel fans who were almost deafening when the lights dimmed and the band appeared. They were to keep this up, along with singing almost every word, for the next two and a bit hours. I was surprised now many of the lyrics I could evoke myself but I guess we all know these songs as they’ve been fundamental to the Aussie rock catalogue.
The sound was crisp, loud and clear. The staging both grand and intimate at different times and the lighting was very pretty. Screens hung each side of the stage and a very big screen covered the stage’s back wall all befitting the size of this room.
Early in the set Ian Moss on guitar sang My Baby and with it the full extent of the lighting and screen was used to great effect. In fact whoever was responsible for the graphics and photos that were displayed throughout the show had done a fantastic and beautiful job adding so much to the ambiance of each song.
Many of the songs from the latest Cold Chisel greatest hits album were played and each band member got their moment in the spotlight; although the whole show is powered by that incredible voice of Jimmy Barnes and the phenomenal guitar of Ian Moss. I should add that at Ian Moss still oozes strong sex appeal with that guitar strummed like it was attached to him – phallic like.
I love how music affects people and to see these thousands of Cold Chisel fans overcome by the joy and happiness in the music is a very fine thing to behold.
﻿