Awaiting Dolly on Tuesday evening was a packed arena eager and excited for her first concert back in for twenty odd years.  No one would leave disappointed with at least a few of your favourite songs delivered and we all got to know a little more of Dolly the artist and Dolly the person over the two and a bit hours in her company.
As you would expect after such a long and successful career this was a very polished, slick and somewhat simple act delivered by more than an artist – it’s the work of a well oiled entertainer. And a good one at that.
Dolly hit us, dead on time, with the country/disco upbeat ‘Walking on Sunshine’ and ‘Baby I’m Burning’ looking like a petite drag queen or “white trash princess” as she calls herself,  dressed in a classic buttercup yellow knee length, long sleeved dress adorned by 6 inch bugle beading. She sported the layered long blonde wig and an impossibly clinched waist.
The expected welcome patter led straight into ‘Jolene’, with Dolly playing guitar. This was to become an interesting aspect of the performance as she played, I’m guessing, six or seven different instruments throughout the show – musician Dolly. 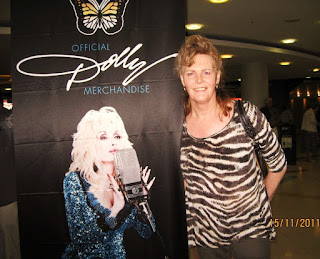 Dolly was straight on to her gay appeal factor, asking the drag queens to stand up so she could see them and telling the first of many lovely yarns. Her gay boyfriends had taken Dolly to a Cher/Dolly lookalike contest one Halloween; Dolly persuaded to parade, got the least applause and was considered unconvincing.
We got quite lengthy stories about her growing up, her family and story and song for each her mum and dad. Here was a master at the old art of storytelling; she was able to bring the huge arena audience right in that you were able to feel the emotion and heartfelt fondness she shared.
I love the new album ‘Better Day’, I find it very uplifting and inspirational, I was really delighted to hear three of that album’s tracks sung live – current Dolly. And whist you wait for them, the 15 minute finale delivers nonstop vintage Dolly one after another; ‘Here you come again’, ‘Islands in the Stream’, ‘9 to 5’, and a full-on country anthem version of ‘I will always love you’.
It’s a long show and to be fair has some parts that don’t quite hit it – she does this wrap thing as a tribute to Queen Latifah, with whom she has just done a  movie, that fell flat and a small bracket of covers which included ‘Stairway to Heaven’ and yes – “it makes you wonder” why, as the lyric says. Also the white culotte suit she wore in the second half was too dated and unflattering.
But hey - you get two hours of the total Dolly and many, like me, had waited such a long time for the experience your glad she came by and said howdy!