Sipping champagne and socialising in the foyer of the State Theatre always seems quaint – but tonight it’s the perfect entrée to the evening ahead.

Here we were the DIVA family on mass as guests of Andrew McManus and 2UE, along with many familiar faces, this crowd was high on the gayness gauge.
‘A night with Joan’ was true to the well oiled British ‘audience with’ formula, in fact this show was coming to us direct from performances in the in early October – so fresh from the mint so to speak.

An overture of the ‘Dynasty’ theme struck up and the huge screen of the State came live with Alexis: Joan, dressed in black sequin leggings and a black off the shoulder gypsy top, diamante strappy sandals came rushing on “stop stop there’s more to my life than Alexis” the screen faded she turned to her audience “lets get to that later, I was born…” and so it was, off we went through her career chronically and keeping very much to her memoirs, which I read last summer and on which this show was based. 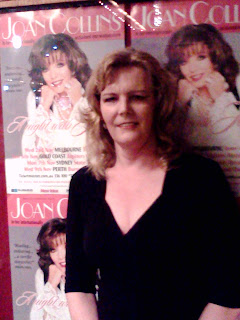 These kind of shows can be a bit thin and dull unless you have the material and Joan certainly does – she is one of the last  studio contracted actresses –  so had plenty of names to throw at us form her golden days of J. Arthur Rank and Hollywood.


Encounters with Gene Kelly, Bette Davis, Richard Burton, Bing Crosby, Bob Hope and others were woven into a polished story with just enough wit and hint of scandal to have us all glued to her.


Gene Kelly had taken her to a party where Joan Crawford was holding court but on introduction had blanked her. Joan persisted and told Crawford that her mother had adored her and that she was named after her - ouch! Marilyn Monroe had told her to “watch out for the wolves in ”, Joan seeming proud to tell us she has managed to avoid the casting couch throughout her career.


At one point a recording took over, the Dynasty clips rolled and Joan returned in a gorgeous gown – now looking every inch the glamorous star. Here came the more juicy tales of Alexis Carrington Colby and the films The Stud and The Bitch. We were reminded she did a Playboy spread at 50 and a quick tip to husbands past. All delivered in a fast paced, campy appealing way.


After receiving a very warm and enthusiastic ovation Joan took a seat centre stage and out popped Percy, her 5th husband and thirty years her junior, with a roving mike and we were treated to an unexpected Q&A.


Lance Leopard was first to his feet and asked Joan an interesting and knowledgeable question about how her beauty had been an asset during those studio days. Joan got the chance to mention her new book on beauty and health tips but avoided the opportunity to tell us what she thinks of the current crop of starlets. Various fans got up to tell her how wonderful she was and to thank her for coming all this way to see us – usual cringing gush.


Then a young chap referenced Alexis being the mother of a gay son and a positive role model of the time, before asking Joan what Alexis might say to our PM given her stance on gay marriage. Joan knew nothing on these politics and said so before very quickly adding that Alexis would most probably tell the PM to “get with it” to a huge round of applause.

Miss Collins is 78, has heaps of charm, is witty, has the energy to run around a stage alone for an hour or so, prefers to always wear a full face, good wigs and is old school glamour – seems I need to get me one of those Percy things!