The soundtrack to my like mashed over 90 mins! Janet Jackson at the Sydney Opera House, 5 Nov 11, was intimate, in my face, loud, smooth and exciting.


This show delivered well beyond my expectations which I might say were quite high after seeing Janet 20 years ago at the Syd Ent Centre and which to this day is the most theatrical concert I have seen, but hear it was the voice and the intimacy which were to make the evening so special. Janet can still move and the dance routines were also a highlight.


On the Concert Hall stage we got a very tight band of 5 musicians, 3 female singers and seven dancers, 2 girls 5 boys (they were sexy as). The sound was perfect for us in our fab seats in row G (although I heard some say not so towards the back circle)  the lighting gorgeous and the stage was placed before a large screen the width of the stage on which we got film, TV and album shots during the few breaks.


This tour is called the ‘Number Ones’ and that’s what we got. Some songs complete some part of and some just sampled. But with 35 to choose from I think everyone got their favourite – I got my lot. The music sounded as fresh as today and this was the creative genius of the show – we got the hits all mixed and matched. An example being we got Scream 1995 into Rhythm Nation1988 into All for You 2001 seamless and smooth.


I ‘m wrapped Janet brought me this tour, this music and a chance to reminisce of past times good & sad, places, friends and lovers. Today my soul sings. 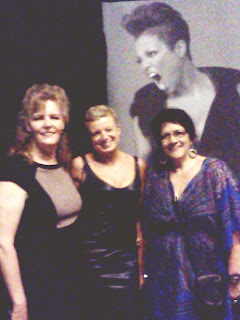